My mother-in-law, who lives in Nevada, was here visiting for the weekend. She stayed at my sister-in-laws on Friday and Saturday, and spent the day and night here on Sunday. Yesterday, she had plans to take a tour in San Francisco. She grew up close to the city, so she always had a desire to go back. She says she could even picture herself living there! My father-in-law, however is the total opposite. He'd probably rather live in a run down shack in the sticks than live there. In fact, he doesn't even like going there just for the sights. So, since she was here by herself for the weekend, she decided she would pay to have a guided tour! She already did some research on her own and knew which company she would go with. All I had to do was call to reserve it for her and drive her to the bart station in the morning that would take her to the city. My husband works in San Francisco, so he walked over to where she got off on bart to make sure she made it okay. After work, he met her back at the same place where she was dropped off at the end of the tour so they could take bart home together. I let her borrow my camera since she forgot hers at home, and she took some really great shots! I'll just share a couple of the more popular "landmarks" that is widely known around the world. So, in case you never get to travel to the West Coast, here are some pictures of a very foggy morning in San Francisco, Californ..I-A!
One side of Fisherman's Wharf 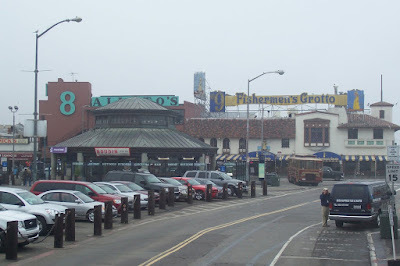 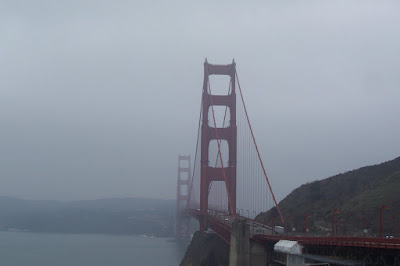 This bridge has the HIGHEST suicide rate! They are planning on putting a net underneath the bridge. Cost? $50 million!! 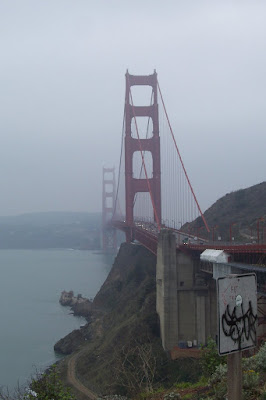 The red bus is what she was on for the tour 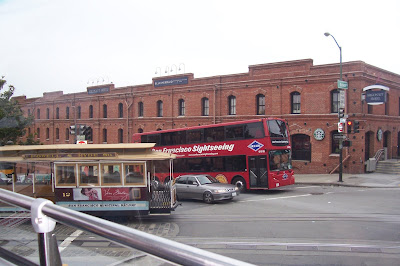 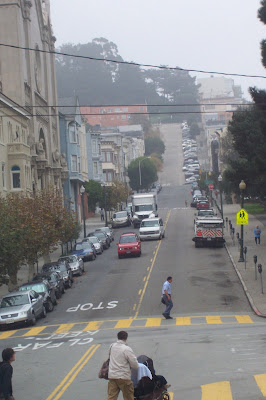 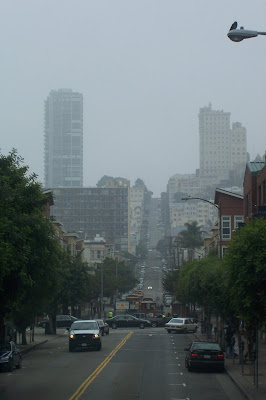 I saw a special on that Bridge and about the suicides. Very interesting, but sad. Seriously, a net?

she did get some great shots! I love the ones of the bridge!

I was just saying to Curt that I'd love to see San Fran one of these years. I'd much prefer to go there over LA, if it was just us, otherwise we'd go to LA with the kids to go to Disneyland.

I know..can you imagine the tax dollars going to a net??

Melissa..yes, if it was just you and hubby, that would be good. I don't even want to go there w/ my kids. Too much crazy stuff going on there for them to be exposed to.

She did take great pics! I loved seeing them. I'm not sure when I will ever be able to make it there. I will one day, just not anytime soon.

Unfortunately I don't think a net would help the overall suicide rate. People will find another way to commit suicide. What a sad thought!

Alicia, I enjoyed the pictures. We passed through San Francisco once while on vacation. We took the kids to see the Wharf and we enjoyed seeing the bridge too. Unfortunately we had very little time there, but I loved seeing a street of "Painted Ladies" or whatever they call those houses.

Those are some great shots! I have always wanted to visit San Fran. My parents have been there a few times and loved it!

Great pics! I have never been to your side of the country, maybe I'll have to visit someday. :) Ang

I've never been to San Fran but she did get some beautiful shots. I pray you had a blessed time with your Mom.

Hugs to you today, sweet friend.

Yay for your mom!!!!! Looks like she had a great time and got some wonderful shots!

Wow~! She took a lot of GREAT pictures! I LOVED looking at them!

San Fran is definitely a place I would love to visit one day!

Hey....aren't you proud of me? I am blogging from the upstairs computer....cold and very uncomfortable...but I miss you ladies! lol!

What a beautiful place!

SF is so beautiful!! One of these days... I will go there! NOT for the reason you spoke of! :o)

Those are great!! 50 mil for a freakin net! WHAT?!?!? That's insane. So sad that people would go to that level to end it all.