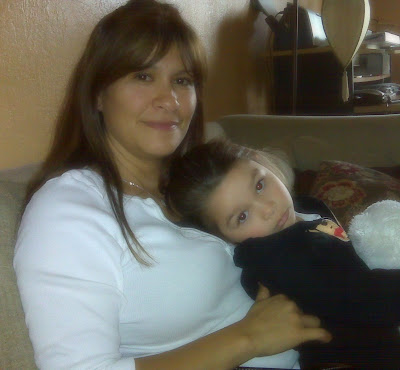 Patricia and her granddaughter

I had a wonderful surprise today!!! One of my friends (who I have not seen in a couple of years) stopped by in the morning!! Her and her hubby bought a house up north (a good two hours away), so we have not seen them since they moved. She had to do errands down this way, so she decided to stop on by to see how we were doing! She brought her little granddaughter with her, so it was nice to see her too! My friend doesn't even look like a grandma! She looks more like she can be her mama! Anyway, we used to do so many things with their family! It was one of those friendships that just "clicked" from the beginning. I do miss seeing them and her kids. It's funny how God brings certain people in your lives for a season. Not to say that we're not friends anymore. We will definitely keep in touch more often now that we saw each other, but I just remember that time in my life where our friendship was a part of a growing process (in the Lord). I'm just so glad that we were able to start off where we left off and that there was no "awkwardness" between us. We are making plans for us to all get together again. Hopefully sooner than later.

She does not look like a grandma!! It's awesome when old friends get together. It's like you skip the "how's the weather" and get right down to it like you didn't skip a beat.

You are right she does look more like the mama, must use mary kay I presume???...lol
so glad you had a wonderful day with an old friend, my precious children had a half of day of school today if that says anything about how my day went.....:{ I am a little frazzeled but I am calming down.. hee hee hee

What an awesome day...spending time with an old friend. She is beautiful and so is her granddaughter.

What a fun and unexpected surprise. Old friends are the best friends. That is the way it is with MiMi when we get back together, like we hadn't even been apart. Glad you had a good day!

OH how sweet! What a great time! Isn't it amazing that some friendships never seem to change no matter how far or how long you have been apart.

I now need sleep. I will catch up more with you tomorrow, my friend!

I just love friendships like that...ones that you can just pick up where you left off! And she so does not look like a grandma! What a nice surprise!

Have a great weekend!

I love friends like that - where you can be out of contact for ages and then just jump right back in where you left off with no regrets or issues...

Wow! She really doesn't look old enough to be a grandmother. How nice that you were able to do some visiting. Old friends are the best.

Why does she look so familiar ?

I can NOT believe she is a grandma. You go, girl!